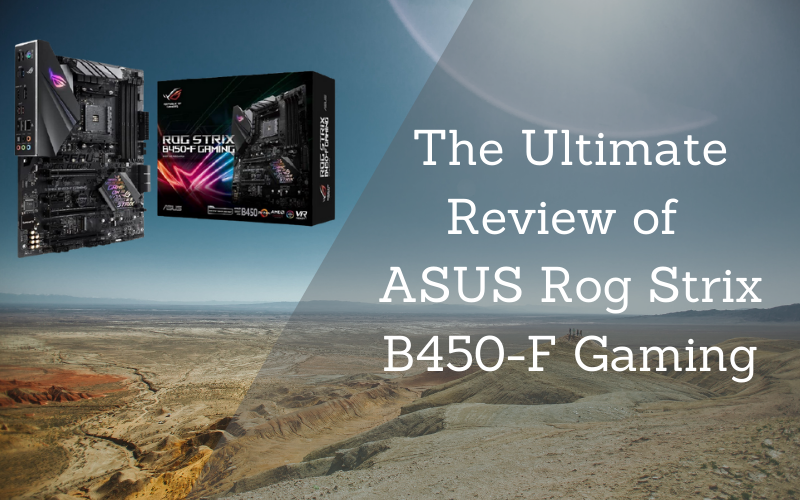 The ASUS Rog Strix B450-F Gaming motherboard is a classic, and a mid-range board and is part of the Republic of Gamers lineup. In an affordable package, the ASUS Rog Strix B450-F Gaming manages to offer excellent performance and feature set that we can expect from any other motherboard of the same price tag. Let’s do an Asus rog Strix b450-f gaming review.

If you are looking for a perfect motherboard for optical gaming performance then the ASUS Rog Strix B450-F Gaming board should be your first and the best choice. ASUS’ brand-new motherboard features Aura Sync RGB lighting tech, Intel Gigabit Ethernet, GameFirst, one-click overclocking and optimization capabilities, and the wonderful SupremeFX S1220A audio hardware, plus Sonic Studio III.

However, none of this technology seems particularly innovative, so we know it’s great. It seems to combine the high-end hardware of the Asus Rog Strix X570E,  X370, and X470 devices with the more cost-effective B350 product range, leaving us with the new ASUS Rog Strix B450-F Gaming. So far, it looks promising. Plus, it supports 2000-series Ryzen CPUs right out of the box.

Contents hide
1 ASUS Rog Strix B450-F Gaming Review:
1.1 Other features as claimed by the manufacturer are as follows:
1.2 Conclusion: 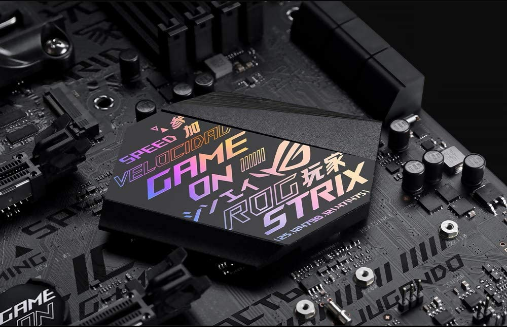 What’s Inside the Box Of ASUS Rog Strix B450-F Gaming?

Those accessories included are appropriate for the board and contain what you need to get started. The box comes with the following accessories:

Its overall design is matte black with glossy black labels around the PCI and chipset slots, along with some ROG-related slogans, including Republic of Gamer, Hybrid, and characters from other languages. It’s important to note that this design is also found on the back of the board in grey.

Technical Specifications: The ASUS Rog Strix B450-F Gaming looks the part and has a lot more of the modern features that the average user will expect. RGB lighting on both the integrated IO shield and Chipset heatsink, two Aura sync RGB LED strip headers, dual M.2 sockets supporting 2242 to 22110 drives with both supporting NVMe and the primary slot also enabling SATA M.2 support. On paper, the F seems like a very attractive prospect, especially with its PCB design that seems more like Strix’s other creations.

Storage and Design: The ROG Strix B450-F Gaming motherboard, In addition to the B450 chipset, has a substantially improved layout compared to its predecessor. In older boards, one of the PCI Express x1 slots was placed directly below the primary PCIe x16 slot, making it essentially useless for anyone using graphics cards.

A long M.2 Key-M 22110 slot caused Asus to not be able to place the PCIe x1 slot above the graphics card slot, which also made the ROG Strix B350-F Gaming’s finished build appear a bit less organized.

Since the long M.2 Key-M 22110 slot is easier to access, it should naturally be a primary M.2 slot, but you may want to avoid this slot if you have a graphics card installed. As Asus is setting this slot up, it will use PCI Express 3.0 lanes from the CPU, effectively locking the primary PCIe x16 slot to any electrical PCI Express 3.0 x8 connection whenever an M.2 storage device is placed in this slot.

In an effort to improve the ASUS Rog Strix B450-F Gaming motherboard’s aesthetics, Asus added a shroud and an LED Republic of Gamers logo around the rear I/O ports and made the rest of the board look fresh. Otherwise, there weren’t any significant changes made to the board’s appearance or storage configuration. ROG Strix B450-F Gaming has the same eight-phase power design as its predecessor.

Slot Support: The ASUS Rog Strix B450-F Gaming has three PCIe x16 slots and three PCIe x1 slots. It receives data from the CPU’s PCI Express controller, which is a PCI Express 3.0 x16 configuration. It is recommended again that only use the M.2 Key-M 22110 slot if you must, otherwise, your GPU will lose half of its bandwidth as mentioned above.

The second PCIe x16 slot is also available to feed via the CPU and is amazingly capable of a maximum PCI Express 3.0 x8 connection. If the M.2 Key-M 22110 slot is in use then you guessed it right, this will further be reduced to a PCI Express 3.0 x4 connection that will probably hamper performance to some degree.

The last PCIe x16 slot, as well as all three PCIe x1 slots of the ASUS Rog Strix B450-F Gaming, get their data through the B450 chipset. The PCIe x16 slot shares its data connection with two of the PCIe x1 slots and will disable them if used. So be sure to check the specifications page or your manual if you intend to fill most of these slots to make sure you configure your hardware optimally. 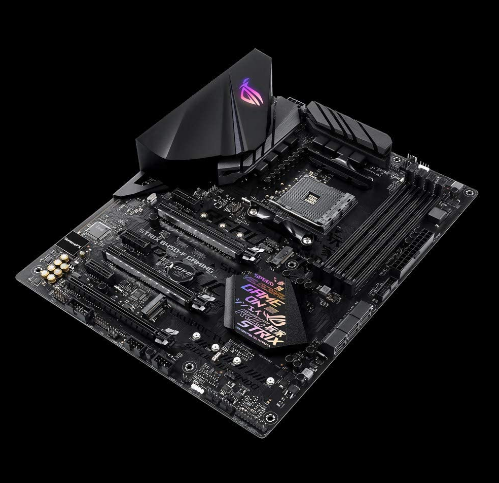 Audio Subsystem: In comparison to the ASUS Rog Strix B350-F board, the audio subsystem on the B450-F Gaming board is almost unchanged. It consists of a Realtek ALC1220 DAC with an SNR of 120dB and a whole bunch of Nichicon high-end audio capacitors.

In order to reduce EMI, the audio component is segmented from the rest of the board and covered by a shield. A pair of OP-AMPs is an important component in boosting the signal output from headphones and small speakers. The motherboard also comes with Asus Sonic Studio III software, which provides some additional features for audio reverberation that Windows lacks.

It also has the standard 3.5mm audio connectors, a SPDIF optical port, an RJ-45 Ethernet port, as well as HDMI 2.0 and DisplayPort connectors for processors with integrated graphics. It has an RJ-45 jack connected to an Intel i211-AT network card that supports Gigabit Ethernet. If you want to connect a Wi-Fi adapter, you’ll need a PCIe x1 or USB adapter.

BIOS and Software: EZ mode menu allows you to set the boot order and restart your system, as well as overclocking your system with the EZ Tuning Wizard. The BIOS provides an EZ Mode menu that provides basic performance statistics and operating conditions.

In addition to Sonic Studio III software, Asus included Aura Sync RGB software allowing users to customize the RGB lighting within the board, as well as any additional lights connected to its two Aura RGB-based headers.

One of the best utilities included with the board is Asus’s GameFirst IV, which allows you to store data from multiple networks simultaneously. This app’s usefulness will be limited by other networking factors, but in the right scenario, it can improve performance while gaming and downloading large files.

Other features as claimed by the manufacturer are as follows:

Performance Level Up: Getting the best balance between performance, cooling, stability, and efficiency via one simple user interface is easy with the exclusive AI Suite 3. Its dashboard-style control panel makes it easy to fine-tune almost every aspect of your ASUS Rog Strix B450-F Gaming system.

Cooler By Design: The ASUS Rog Strix B450-F Gaming features the most comprehensive cooling options ever, configurable via Fan Xpert 4 or the UEFI BIOS. Every onboard header supports the auto-detection of PWM or DC fans. Lastly, a dedicated PWM/DC header for self-contained water-cooling setups.

SupremeFX: Utilizing the S1220A codec, SupremeFX is the integrated audio solution that’s engineered to provide a flat frequency response for a neutral, detailed sound signature. And to ensure that pristine signature is perfectly preserved, the front-panel output is driven with dual op amps, delivering sonics with the scale and authority to create virtual worlds via your gaming headset.

Design, Customization, and Setup: A host of design touches, customization options, comprehensive validation lists, and the most diverse ecosystem of components in the industry make building and personalizing a gaming rig with ROG Strix B450-F Gaming wonderfully easy. ROG’s patent-pending I/O shield is finished in sleek matte black and comes pre-mounted to make it easy to install the motherboard.

Outshine the Competition: ROG Strix motherboards deliver superior performance and aesthetics to Outshine the Competition. ASUS Aura offers full RGB lighting control with a variety of functional presets for the built-in RGB LEDs and lighting strips connected to the RGB header. All lighting can be synced with an ever-growing portfolio of Aura-capable ASUS hardware.

Cyber Outlook: The distinctive sleek cuts across the ROG Strix heatsink are now accented with a futuristic cyber-text pattern, fusing multiple gaming cultures to create a unique identity for this generation. If you prefer a subtler style, you can swap the PCH sticker with an included alternative. The choice is yours. 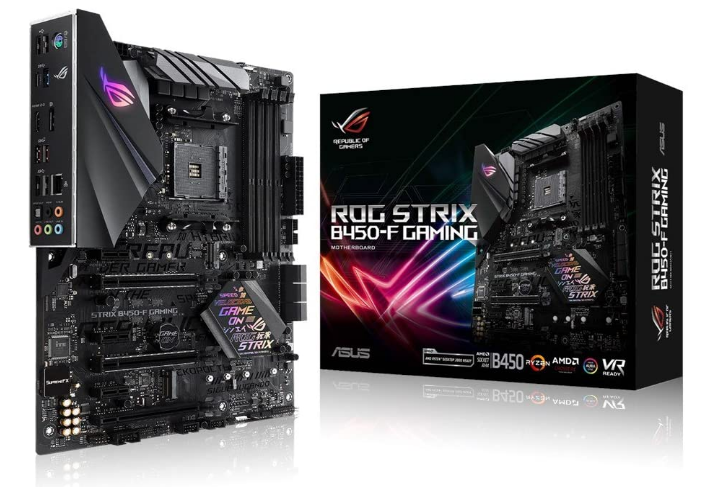