If we talk about the modern technology of virtual reality, the most popular device for our computers is Oculus Rift CV1. These glasses allow the user to have an immense experience by controlling the headset position and movement of your controller. The brand Rift has a vast range of not just virtual reality applications but also some cool games. Comparing the VR glasses manufacturers all over the world, Oculus Rift CV1 scored the second position in 2018. The quality that they provide is great for this price point and we can’t forget the usability factor. It had around 19.4% share in the world market because of the great features.

First talking about the composition of these glasses, the material is plastic but it looks sturdy and high quality. The black color with a matte finish gives it a more interesting look from the front. The strictly minimal design not just looks stylish, but we also find the design futuristic. To support the device, there is an overhead rubber with a flexible plastic frame so all of the weights are not on your nose.

The elastic strap fits tightly around the head and feels comfortable. It weighs 470 grams and that makes it better than the competitors because PS VR or Vive produces heavy VR glasses of such kind. A regulator comes below the glasses that allow you to adjust and manage the lenses according to the IPD (Interpupillary Distance). You can’t adjust that with a digital ruler as none comes with it, you will have to get a manual ruler to measure the arrangement of lenses.

If you wear glasses, you can use them with the Oculus Rift CV1, but if you use them for over an hour, the whole experience will be inconvenient. Not just because there is limited space between your eyes and the device, but also the sides of your glasses won’t fit right into the device and the arms of your glasses with the device pulling it on will press on your temples continuously, and that will surely not be a pleasure.

You can easily adjust the size with a plastic handle to pull it out according to your size. But, if you wear lenses, using this device over can be dangerous because of the heat produced while its use. It can damage your lenses because even if you use an air conditioner in the room, it still gets pretty hot. 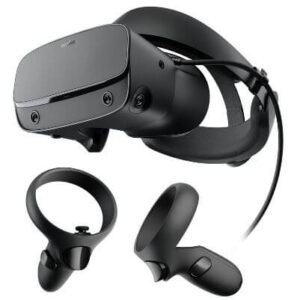 You get the OLED display in the oculus rift cv1 glasses and it has 1200×1080 resolution so you can get great gaming experience. This figure is the same as most of its competitors, but it falls behind in the flagship models from Windows and HTC VR devices.

It comes with a 110 degrees viewing angle, but if you use your glasses as well, the angle will be more narrow. There are some night vision glasses that can be really helpful while driving. It has the great image quality and that matches the HTC Vive Pro. You can even improve the picture quality with the oculus debug tool.

How To Use Oculus Debug Tool?

You might also find the Oculus Quest Vs Go comparison interesting.